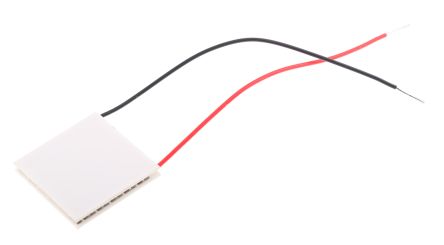 Peltier cells are usually applied to cool surfaces when connected to an electric power supply but they can also convert differences of temperature between their sides into a voltage, known as the Seebeck effect. Therefore, it is possible to have a voltage at the ends of the wires of a Peltier cell by applying heat to one of the sides and attaching a heatsink to the other side. In terms of energy harvesting, the heat should come from a residual source such as an electrical or mechanical machine or, simply, the sun using Fresnel lenses. The cooling of the other side should be passive to minimize the energy consumption, hence the use of a heatsink. It is important to know how much energy can be obtained with a single cell as a function of the difference of temperatures, for this reason, the characterization of the cell must be the first step in the design of applications scavenging energy. The mounting scheme is shown in the side Figure where the heatsink is clearly seen on top of the cell. This is hidden by some pieces of thermal insulating foam but the two wires are visible. Finally, an aluminium plate has been adhered to the cell with a thermal conductive bonding paste.

The aim of this work is to obtain the Thévenin equivalent of an Adaptive ETH-071-14-15 Peltier cell but the process is valid for any other type of cell. The datasheet details the working curves when the cell is used as load but nothing is said about its characteristics when used as a source. The characterization requires the application of a known difference of temperatures, ΔT, and this is achieved injecting current to a pair of ceramic resistors  of 47 Ω in parallel attached to the aluminium plate with silicone. Two LM35 temperature sensors read the temperature of the aluminium plate and the heatsink. Notice that, once the plate and the heatsink are attached to the cell, its sides are no longer reachable so the sensors have to be connected to the closest surfaces to the cell. There will be an uncertainty in the measurements but we can asume that it is negligible or, at least, that it affects the two sensors in the same manner so the difference of temperatures is the same as in the surfaces of the cell. The mounted cell is enclosed in methacrylate box coated with thermal insulating panels ensuring that, once a constant difference of temperatures, ΔT, is achieved, it is maintained along the experiment so the output voltage can be directly related to the selected ΔT.