The idea of this work is to control the rotation direction, speed and position of a NEMA23 stepper motor remotely via WiFi. The application running in Android should send the parameters to the ESP8266 and this microcontroller would send the signals to the driver of the motor.

Stepper motors are widely used in 3D printers so there is a large variety of models and manufacturers. The acronym NEMA stands for National Electrical Manufacturers Association and the nomenclature after the name refers to the size of the motor. It should be standarized so 23 would correspond to 2.3 x 2.3 inches, but most manufacturers do not follow these exact dimensions and, though they are close to the correct size, there may be differences. The selected motor for this application is a JK57HS56-2804 with the following data:

The interesting parameters in most applications are the current per phase which will condition the selection of the driver and the holding torque that would be determined by the application of the motor. In this case, we need a fairly high torque to move the rig described in this paper which consists on a horizontal rod and a vertical shaft connected directly to the stepper motor.

The driver to control the rotation of a bipolar motor with four leads is a DRV8825 with a maximum current rating of 2.5 A as long as the circuit is refrigerated. Otherwise, the temperature protection will prevent the integrated circuit (IC) from working continuously. I used a forced ventilation with a small fan connected to 12 VDC and the current through the coils reached 2 A. All information about this driver can be found in the Pololu web page, but the most important is the connection pinout:

It is important to notice that both NOT_RESET and NOT_SLEEP are connected to high (or 5 V). I didn’t connect the 100

F capacitor to the power supply that was set to 25-30 V. The inputs M0, M1 and M2 are connected to low or high depending on the selected microstepping. There is a nice table in the Pololu web page and in the datasheet of the IC, however, I have to say the microstepping doesn’t work as expected: for instance, when you set a 1/16 microstep, the motor will turn for correctly for 8 microsteps and then it will jolt to the final position without continuing with the 8 remaining microsteps. This behavior seems to be common to the DRV8825 as it is also commented by Moritz Walker in his web page.

Finally, the STEP and DIR pins are connected to the GPIO4 (general purpose input-output 4) and GPIO5, respectively, of the ESP8266 microcontroller. The next figure shows the layout of the NODEMCU v1.0 which is a development board for the ESP8266 microcontroller. GPIO4 and GPIO5 are pins D2 and D1 respectively. When programming the NODEMCU, these pins should be defined as outputs. The DIR pin would be high to turn the motor clockwise and the STEP pin would receive a square wave with a predefined frequency to control the rotation speed. The higher the frequency, the higher the angular speed, so this square wave will be also a parameter that has to be defined. 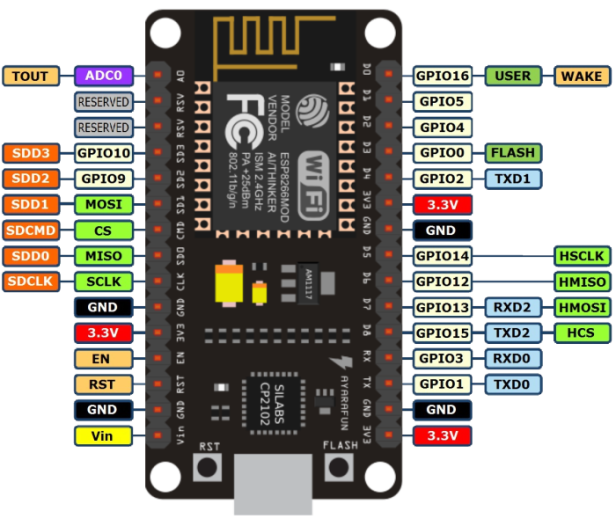 The NODEMCU is natively programmed in LUA, however, I am more familiar with C and the Arduino IDE, so there is a possibility of using these tools with a plugin for Arduino, you just need to follow the instructions detailed here.

Now, the ESP8266 will work as a soft access point so it will create its own Wi-Fi network and we will connect our mobile app to this network and pass data to the MCU as shown in the next figure taken from this excellent page.

To do so, it is necessary to include this piece of code which also includes the definition of the pins as outputs and the additional variables that define the movement of the stepper motor.

The address will be written in the PC console, however, it has always been 192.168.4.1 whenever I have used it.

And this code finishes the void setup() function.

Finally, the server is started. The loop function will only have a recursive function called:

that will handle the incoming of HTTP requests.

The function in the root path will inform that everything is ok when accessed by returning the code 200 and a plain text.

The other function will parse the data sent by the app in the mobile phone and will send the outcome to pins DIR and STEP defined previously in the code and returns a message to the app showing that everything has been understood.

Now, the objective of the app in the mobile phone is simply create the string with the URL based on the preferences of the user. This is easily done with MIT AppInventor.

The first step is to define the layout of the application and the elements in the screen. We need a button to connect to the access point defined by the NODEMCU, and another button to send the data introduced in two textboxes. The decision on what direction of rotation is done by ticking the desired choice in two check boxes. Google Charts allows to visualize data in websites with a large number of plot types using JavaScript snippets that can be added to the code of the webpage. The code can load any Chart library, add the data to be plotted using the DataTable class, customize the plot and create a usable object with an id that will be used in the webpage with a <div id="id_of_the_chart" style="width: 900px; height: 500px"></div> to display the Google Chart. Easy ready-to-use code can be found in this get started web page.

The following code plots a smoothed function with the array in the variable data.